What If You Were in a Helicopter When the Engine Fails?

By Diane on December 29, 2016 in Beyond The Covers, Blog, Heir Hunter, Michael Flint

If you want to write a great action scene, you’ve gotta know something about physics, know someone(s) who does, or be able to figure it out through research. For me, it’s a combination of all three when I write action scenes for my thrillers. One of them happens in Blood Trails, my new thriller novel featuring Michael Flint, Heir Hunter.

One fascinating concept I studied up on for Blood Trails was what happens when a helicopter’s engine goes out mid-flight. Does the chopper suddenly drop to the ground like a brick? The short answer: No. Instead, something called autorotation happens. It’s like a helicopter’s equivalent of gliding. So, instead of the engine powering the rotor, air moves up the rotor and the helicopter sort of, essentially, makes it glide. 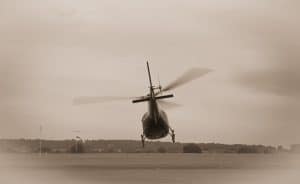 One really reassuring fact that I learned is that autorotation is set into action automatically when a helicopter’s engine fails. A clutch disconnects the engine from the gearbox, which lets the tail and rotors spin freely. And that’s when the glide, or autorotation, begins.

It’s not a free, “automated” ride down for the pilot though. A smooth landing can happen, but it takes skill. When the helicopter is close to the ground, the pilot increases the pitch on the blades to create a momentary amount of lift. It’s enough to slow the helicopter for a soft landing. As scary as it sounds, the landing can be amazingly gentle for a heavy machine full of people falling like a brick.

Autorotation is the only way to land a helicopter safely if the engine goes out.

Here’s a five-minute video explaining how pilots handle autorotation. If you watch it, you’ll discover I’ve made autorotation sound easier than it is!

Kudos, and thanks, to all the brave and talented pilots out there who help us get safely from Point A to Point B.