Saturday Special: What To Do After Over-Indulging

Did you have a wonderful Thanksgiving? I hope so! Mine was fantastic, but now… 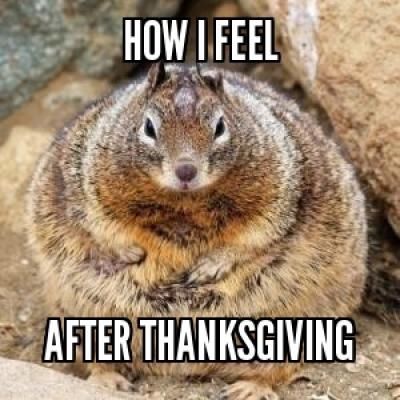 Please tell me I’m not the only one who had a second slice of pumpkin pie!

It’s times like these that I ask myself, “What would Jess Kimball do?”

Easy. She’d go for a run. She’s an investigative journalist, you know. But she’s also an avid runner. Helps her work out problems.

I don’t know, somehow the idea of staying home with a book sounds more appealing to me this weekend.
Hmmm… I’ve got it! An audiobook. That way we can run, or at least walk, and consume our stories at the same time. Who’s with me?!

It’s no wonder Jess Kimball runs a lot. I told you the challenges of Jess’s job writing for a magazine on my blog earlier this week. For her, fact-finding often becomes a life or death mission.

Writing about Jess reminded me that last year I shared with you some facts about Thanksgiving — far from investigative journalism, but I think interesting facts nonetheless. Here they are again in case you missed them:

Okay, this has been fun, but that’s enough reflecting on Thanksgiving Past. Let’s get out there and “investigate” the wonders of audiobooks! Maybe after a few chapters, we’ll have room for another slice of pumpkin pie. 🙂