Why We Need Cursive

By Diane on October 1, 2015 in Behind The Book, Beyond The Covers, Blog

Should we require kids to learn cursive writing in schools? It’s a hot button issue for sure.

Many schools have removed cursive writing from their curriculums. In the U.S., it’s not included in State Standards anymore in 45 states. There is a lot of debate about this, but I’m on the side of keeping this important skill in schools and colleges and active in our lives as adults.

Yes, I’m one of those people who enjoys cursive writing. I keep a handwritten journal and I’ve done so for twenty years. But that’s not the only reason I feel strongly about cursive.

Even though I have a strong opinion, I’m interested in keeping the debate going. So I’ll tell you why I’m pro-cursive writing. Then you can tell me why I’m right or wrong 😉 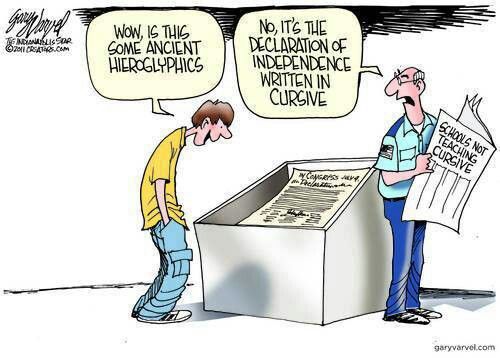 Writing by hand embeds knowledge into the brain better than using laptops or other devices, according to scientists. There are several examples to back this up…

We know that students who use laptops take more notes. That’s a good thing, right? Well… turns out, students who take notes by hand ABSORB the information better.

A study by Pam Mueller and Daniel Oppenheimer found that

“…those who wrote out their notes by hand had a stronger conceptual understanding and were more successful in applying and integrating the material than those who used took notes with their laptops.”

The same study concluded that writing by hand evokes more emotions and connections with personal thought processes than typing.

Sometimes I write portions of the outlines for my books by hand. In cursive. Maybe this explains why I find that cursive writing helps to jump start my brain and make me more creative!

In Psychology Today, Dr. William R. Klemm gives the physiological evidence for this. He says that brain scans taken while people were writing by hand showed that “massive” regions of the brain were activated, engaged in language, thinking, and working memory. Fascinating stuff.

So what is it specifically about cursive writing?

Dr. Klemm says part of the advantage of cursive writing is that, at least on some level, you’re forced to think about what letter is coming next before you write it, which is more mentally demanding than printing the letters and much more than typing them.

And, The New York Times says,

“Cursive handwriting stimulates brain synapses and synchronicity between the left and right hemispheres, something absent from printing and typing.”

Cursive handwriting is also supposed to be faster than print handwriting. But it’s not faster if you don’t practice it —  so let’s practice it!

And let’s teach the kids! 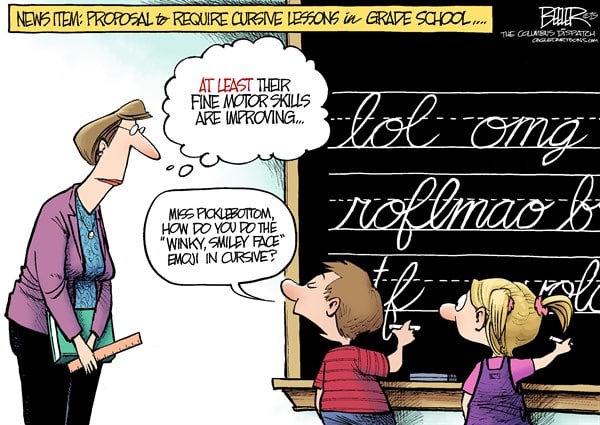 It may be frustrating at times … but I say it’s worth it. What say you?

Lee Child and Stephen King On Stage
What About Sundays?

9 Responses to Why We Need Cursive