What’s the Orange Part of Your Day?

What does your daily routine say about you?

Check out this chart showing the different daily routines of some of the world’s most creative people. You’ll have to click on it to see a version large enough to read, but even at quick glance you can see how different types of creative people allot their time. 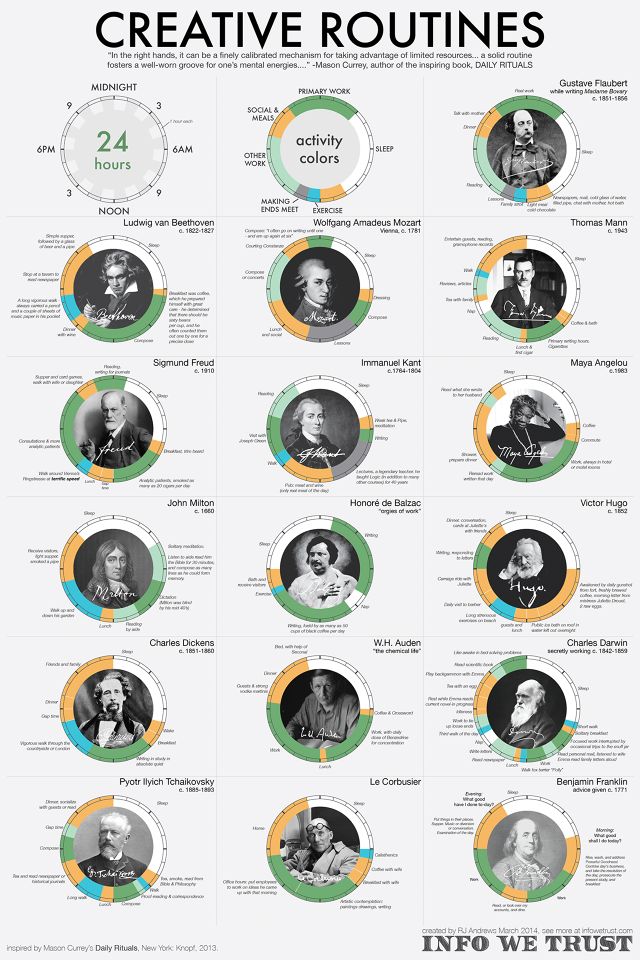 I was looking at this chart because I’m working on my next Hunt for Jack Reacher thriller, and I’ve been thinking about the job FBI Special Agents Kim Otto and Carlos Gaspar are tasked with, and the different approaches the two partners take. Gaspar is often totally laid back, and Otto is sharp, quick, and on her toes. Though they aren’t composers or writers like the people in the chart, their work is definitely creative. They’re problem solvers. Kim Otto is a lateral thinker, often at odds with the linear thinking Gaspar.

Stay tuned– next week I’ll share some of my research about thinking styles that lead to Gaspar asking Otto questions like this:

“Are you sure you don’t have kids? That’s the kind of logic I get from my teenagers.”

Don’t forget to leave a comment (if you’re seeing this in email, push the RED COMMENT button first) and let me know what the Orange part of your day is. Is “Social and Meals” something you set aside time for daily?

Saturday Special: New Thriller Underway, and More!
Why Are We Hunting for Jack Reacher?

2 Responses to What’s the Orange Part of Your Day?