Now imagine finding that much cash, in the form of coins so rare, that some of them are worth about a million dollars!

I think I’d pass out.

That’s what happened to a couple in California, minus the passing out part (at least as far as I know!). The couple recently found buckets of rare, mint-condition Gold Rush-era coins in their backyard. 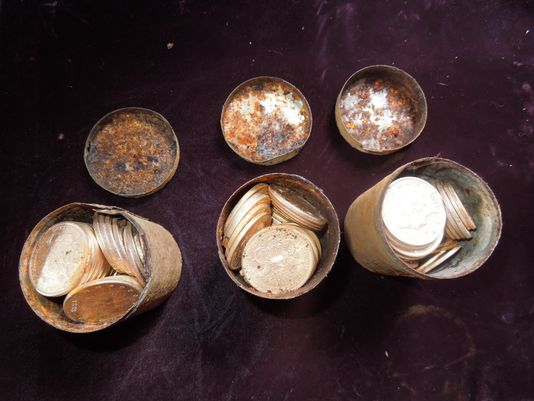 USA Today says the couple was walking their dog when they noticed a canister in the ground. They dug it up, and found it was filled with gold coins. They went on to find a total of 8 canisters. Turns out, it’s considered to be the most valuable treasure trove ever found in the United States.

We talked recently on my blog about stashing money away, but we never mentioned hiding it in the ground!

Some of the coins are going to an exhibit in San Francisco. Others are going up for auction. The first coin sold in the auction fetched a “mere” 15K. But some are expected to bring a million dollars or more.

So far, the couple has chosen to remain anonymous.

Between this and the anonymous money donor who was roaming around California (stay tuned for that post!), that state is one lucky place to be right now.

Forget playing the lottery. I’m moving to California and going cash hunting! Who’s with me?! 😉

Flight 12: Book #2 Available Now!
Saturday Special: If Only We Knew…