MacDill: More Than An Air Force Base

By Diane on January 9, 2014 in Behind The Book, Beyond The Covers, Blog 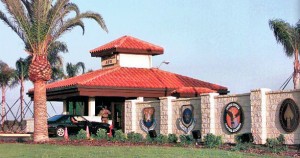 If you follow Bayshore Boulevard in Tampa south, all the way along the water’s edge, you will pass the fictional entrance to Judge Willa Carson’s Plant Key home, and eventually run into the very real entrance to MacDill Air Force Base, which occupies the bottom section of the peninsula that makes up South Tampa.

And immediately, you understand one of the features that makes MacDill Air Force Base unique — it is surrounded on three sides by water. Which means a couple things —  the Base’s Security Forces have to use boats to provide security, and it also means the base can accommodate water training. (At MacDill, even the military dogs undergo water training!) 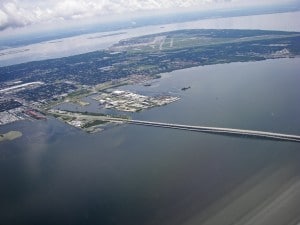 The location has allowed MacDill to expand into realms unusual for an Air Force Base.

The location actually started as a military staging area during the Spanish-American War. In 1939, the War Department decided the space would be a great spot for a new military air field.

So, not only does the Base house the 6th Air Mobility Wing, it’s also home to 39 Mission Teammates. That includes the U.S. Central Command and the U.S. Special Operations Command.

All branches of service are represented at MacDill, which leads to a depth of community. Members of the Air Force live alongside soldiers, sailors, Marines, and Coast Guardsmen.

And that, no doubt, creates an interesting dynamic for people of all ages who live on base. Family housing is available, complete with patios and fenced-in yards. Amenities including golf, bowling, swimming, a marina, and running trails. Not to mention the multiple dining facilities offering fresh seafood!

So… why am I telling you about MacDill Air Force Base? Keep an eye on my blog and website and you’ll find out soon enough! (And while you’re waiting – who are The Twelve?)

2 Responses to MacDill: More Than An Air Force Base