Can you believe it was 20 years ago today that Olympic skater Nancy Kerrigan was attacked? Such a bizarre sequence of events. Almost like something out of one of my suspense novels. With the Winter Olympics just one month away, I’ve been thinking more about this case. The events happened in Detroit, where I was living at the time. 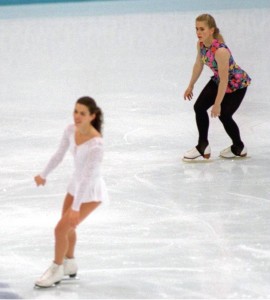 17 FEB 1994: NANCY KERRIGAN AND TONYA HARDING OF THE USA ON THE ICE TOGETHER DURING TRAINING AT LILLEHAMMER, NORWAY. Mandatory Credit: Pascal Rondeau/ALLSPORT

You remember the story, don’t you? The day before the U.S. Figure Skating Championships in Detroit, Tonya Harding’s ex-husband and her bodyguard allegedly hired a man to strike Kerrigan in the leg with a police baton. Folks said Harding wanted her rival out of the competition in time for the Olympics. Was that true?

Harding claimed she had no involvement in the attack. Under threat of a lawsuit by Harding, the U.S. Olympic Committee (USOC) allowed Harding to continue and compete in the Olympics.

Media reports say the ex-husband, the bodyguard, the attacker, and a getaway car driver did prison time for the attack. It’s been reported that Harding pleaded guilty to hindering the investigation and escaped jail time.

The only evidence I’ve heard against Harding was testimony from her ex-husband, Jeff Gillooly. He allegedly told FBI agents that Harding approved the plan to attack Kerrigan 10 days before it happened.

As I review the case today, 20 years later, I wonder how things would have played out differently today. Gillooly’s attempts to destroy evidence apparently included burning magazine pages and faxes. Today, destroying the evidence would be even easier — deleting a text message, for example. But would computer forensic scientists have been able to retrieve such deleted evidence?

What about Tonya Harding? The lawsuit she filed against the USOC contended that she had not been charged with a crime, that the USOC didn’t have the power to discipline her, and that she would be denied due process of law if a USOC hearing were held. Would more advanced FBI technology today have persuaded the USOC to remove Harding from the team? Or, once again, would a threatened lawsuit be enough to change the USOC’s decision? Would Harding have been disqualified?

I’d love to hear your opinion! As always, thanks for reading!

Secret Lives of Walter Mitty, Dangerous Women and Us
MacDill: More Than An Air Force Base