Killers Among Us: Valessa Robinson

Last month, a woman who was just 15 years old when she helped murder her own mother was released from Florida prison. Valessa Robinson and two friends murdered her mom in 1998 in the Tampa area. Robinson, now 30, was released in December after serving 15 years. 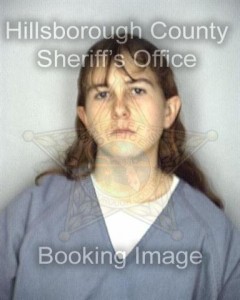 According to Florida state records, Robinson, her boyfriend, and another male friend went to Denny’s the very night of the murder to hatch the plan. The trio then bought a syringe and tried to inject Robinson with bleach. When that didn’t work, the violence escalated. A taped confession revealed that Robinson stabbed her mother in the neck, and twice more in the back.

If you met Valessa Robinson on the streets today, would you know she was a killer? Well… maybe not.

I blogged about having lunch with the author Anne Perry once. You can read that post: CLICK HERE. Anne was convicted of participating in the murder of a friend’s mother when she was 15. When I met her, I had seen the movie about her conviction for murder, Heavenly Creatures. But I didn’t know the movie was about her until later. When they tell me it’s impossible to spend time with a killer and not know they are a killer, I say, “Depends on the killer.”

Valessa Robinson’s then-defense attorney says, while she doesn’t consider Robinson to be a victim, she would say she was a child who was not well protected. She says Robinson was experimenting with drugs and was surrounded by negative influences. A prosecutor on the case says she hopes now, at age 30, Robinson will be able to take advantage of a second chance at life. Anne Perry did. Maybe Valessa will, too.

Long after I met Anne Perry and lived through the media coverage of the Valessa Robinson trial, these killers who live among us inform my writing. I wonder whether killers are evil or do evil? What do you think? Leave your answer in the comments.

“Evil behavior was just a result of something that pushed people’s buttons, and how they justified their acts to themselves.”
–Raw Justice, Chapter 28

4 Responses to Killers Among Us: Valessa Robinson