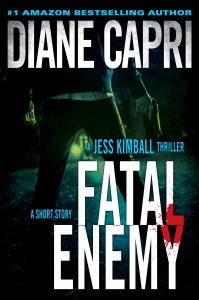 How can she win against killers who refuse to follow the rules?

Jess Kimball hadn’t been in the same room with Richard Martin for more than a dozen years. Worse things than Richard had happened to her since she’d seen him last. He’d find out soon enough that she wasn’t a gullible sixteen-year-old anymore. She was his enemy now and he was hers, whether he knew it or not.

Jess decided long ago she would never yield to him again. Richard Martin would make his choice tonight. Would they become fatal enemies? In this tense battle of nerve and guile, who will survive?

“Thrilling read! Makes you sit up and take notice. She knows how to keep readers reading. Capri has a way with words that’s both captivating and compelling.” C.B.

“The setup for the ending had me wondering what was going to happen – right up until it actually did. Great stuff!” N.

“I was caught at the get go and sailed right through, holding my breath at the end.” M.P.

“Jess Kimball is like a female Jack Reacher, only nicer!” Martha Powers, award winning author of Conspiracy of Silence and Death Angel

“I finished reading your new book and it is fantastic! Kept me on the edge of my seat. You have another winner! I left a review on Amazon, too. A Jess sequel gets my vote! I’m now reading your Judge Wilhelmina series. 🙂 Thanks!” B.W.

“I’m in the final stages of Fatal Distraction and am on the brink of skipping any obligations I have so I can find out how it ends. Great Book so far– continues to keep me totally involved– hope you’ll be continuing a series with Jess–” E. F.

CLICK HERE to grab your copy of Fatal Distraction now and start reading today! You’ll love Jess Kimball as much as Lee Child and John Grisham fans do! 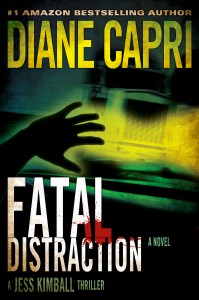 “I ‘stumbled’ on this title and was attracted to it as I am a Jack Reacher fan. Loved the story and the author’s writing style. Couldn’t wait for more so I purchased Annabelle’s Attack and want more Jennifer Lane – please?! Fatal Distraction is also on my Kindle to read list!”

“I have been a Reacher fan for years and was excited when I heard of Diane Capri’s take on “Finding Reacher”. “Don’t Know Jack” is a good companion to Child’s Reacher books and recaptures the flavor of the Reacher mystique. I am waiting anxiously for the next book in the series and the next and the next, and so on.”

Have you read all of Diane’s books?

Diane is the past Executive Vice President of International Thriller Writers, past member of the Board of the Florida Chapter of Mystery Writers of America, and active in Sisters in Crime and other writing organizations. She comes to writing after a successful legal career and is married to her college sweetheart. She loves her nomadic snowbird existence preferring perpetual summer migrating from Florida to Michigan each year.

Diane says she writes mystery and suspense for the same reason she reads: to find out what happens, why people do what they do, and how to bring justice to an unjust world. Her books are translated in more than twenty territories.

Diane loves to hear from readers. Connect with us to receive notice of new releases, subscribe to Diane’s blog, or simply connect with Diane HERE.

Thanks for reading and see you between the covers!