Murder in Paradise is a tantalizing theme. Don’t you agree? There’s something about the contrast between beautiful weather and mystery that makes stories more compelling, I think. That’s what compels me to set a lot of my books in Florida — especially my Hunt for Justice series. 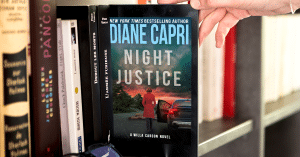 While researching my plots to make them as clever as possible, I usually run across unbelievable true stories. Truth is so often stranger than fiction, isn’t it?

Here’s one true crime story I read that demonstrates this.

In 2018, Denise Williams, then 48, was charged and found guilty of first-degree murder for the death of her late husband Mike William’s 18 years earlier. This convoluted tale of love, betrayal, and murder is as baffling as it is tragic. 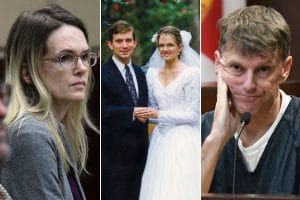 Mike Williams was a well-loved member of his community when he disappeared on Dec. 16, 2000, at age 31, leaving his infant daughter fatherless. Mike was a successful real estate appraiser who had married his high school sweetheart, Denise. On the date of their sixth anniversary, Mike had gone out to hunt ducks at Lake Seminole in Jackson County, Florida.

When Mike failed to return, authorities and close friends began to search the area where he’d been hunting. Among the searchers, was Mike’s best friend, Brian Winchester. Mike’s truck and boat were found, but a body was’t.

Investigators believed that Mike had drowned and his remains consumed by alligators which were prevalent in the area. Mike’s mother, Cheryl Williams, refused to buy this theory and spent nearly two decades campaigning for authorities to uncover the true story of what had happened to her son. 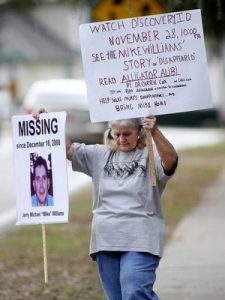 In 2005, five years after her husband’s disappearance, Denise married Brian Winchester. Coincidentally, it was also Winchester who had sold Mike his million-dollar life insurance policy only months before Mike’s death. Although this behavior raised suspicions, there was no actual evidence for investigators to follow up on.

In 2016 an unexpected break occurred after Brian was arrested and charged with kidnapping Denise. He had broken into her SUV and hidden in the back with a gun. Shortly after Brian’s arrest, police-reported that Mike’s body had been found near a boat landing on Gardner Road in north Leon County. 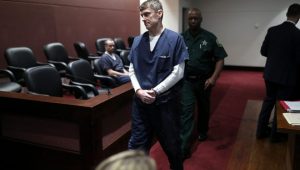 In return for immunity, Brian revealed to authorities that he had shot Mike the day he disappeared and hid the body. Brian and Denise’s marriage had ended in 2012. After the divorce, Brian became paranoid that Denise would turn in him for the murder of her first husband. During his confession, Brian implicated his ex-wife in the planning and concealing Mike’s murder, resulting in her eventual conviction, too. Brian is serving out the rest of his 10-year sentence.

What say you? Do you think Mike and his family received justice? Should Brian have received full immunity in exchange for cooperative testimony while Denise now faces a life sentence without parole?

You can find my Hunt for Justice Thriller Series books on my website.