My readers know that I’m dedicated to writing thrillers that are believable as well as exciting. My plots are always at least theoretically possible. Very often, the things I learn about inform the fiction in my books. This was the case when I was writing my Hunt for Justice books set in Tampa, Florida, home to the fictional star of this series, Judge Willa Carson.

Whenever I start to wonder whether a certain aspect of a story I’m crafting is plausible, I often seem to come across a true crime or real-life mystery that reminds me that truth is often even stranger than fiction.

Here are some strange real-life Florida stories I came across recently:

In 2017, a Florida man was arrested for breaking into a liquor store under construction and causing over $100K in damage. The man used a forklift on site to commit the crime and even threatened police while in the forklift when they attempted to make the arrest. Authorities stated that the man identified himself as being from Alice in Wonderland, and claimed that a hookah-smoking caterpillar was to blame for his reckless actions.

Perpetrators come in all shapes and sizes, some unexpected. In 2012, a Naples High School teacher sustained minor injuries after being hit on the head by a 15″ mackerel that dropped from the sky. Although the fish’s accomplice was not witnessed, the prime suspect was an Osprey.

A different type of strange event occurred in 2019. This real-life mystery began when a Titusville resident, Kelly Garrahan, found a mysterious dead creature in her yard. Garrahan took to Facebook to try and unravel the mystery. The creature was about 2 to 3 feet in length and drew lots of attention online as people attempted to identify it. Although a biologist suggested it was an opossum, many other theories from a dog to an otter were proposed. Just as mysterious as the creatures’ identity was where it came from and how it ended up in Garrahan’s yard.

In July of 1951, 67-year-old Mary Reeser was found deceased in her apartment. Reeser’s landlord had seen her the night before and nothing had been amiss. Shortly after, Reeser had gone to bed and taken two sleeping pills. The next morning, Reeser’s landlord knocked on her door to deliver a telegram. When no one answered, the landlord reacher for the door handle and realized that it was hot to the touch. Alarmed, the landlord contacted authorities who discovered Reeser’s charred remains. 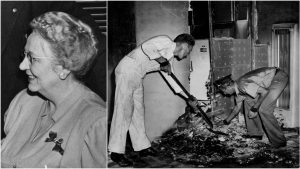 Many strange anomalies were recorded. Very little of Reeser’s apartment was affected by the fire. A pile of newspapers that had been beside the chair she was sitting on were untouched. There was no sign of a break-in or burglary, nor flammable substances within the apartment. Lightning was also ruled out because there was no lightning in the area that night. The case was so baffling that even the FBI could not resolve it.