Did you hear about the new technological development in fingerprinting analysis?

Fingerprints are extremely helpful for solving crimes, and that’s often the reason I research and write about them — both in my books and here on my blog.

For example, in Get Back Jack, FBI Special Agent Kim Otto notices, “Fingerprint residue blackened the [speakerphone] buttons.” Otto is trying to figure out what exactly crime techs discovered about a murder. Looks like the techs checked the phone, eh?

And in Fatal Distraction, fingerprints on paper may help to determine whether a suicide note was written by the victim.

Fingerprinting is a tool that is used so frequently in investigations that fingerprint residue alone can even serve as a clue.

However, fingerprints are far from foolproof evidence. A single dirty or fake fingerprint can throw off a whole investigation. To complicate things further, there had been no way to determine the age of specific fingerprints. Which meant there was no way to tell from the fingerprint evidence precisely when the suspect had been in a place on multiple occasions, such as a home or vehicle.

Two researchers from Iowa State University set out to solve this problem.

Dr Hinners and Dr Lee suspected that they could increase the accuracy of the testing process by studying the reactions of ozone within oils left from the fingerprints. The reaction that occurs is known as ozonolysis and refers to the way that ozone breaks up carbon-carbon double bonds in Triglycerides.

Triglycerides are three-tailed molecules held together by bonds between the carbon atoms.

There are two types of bonds, single and double. The single bonds are saturated and the double bonds are unsaturated.

Unsaturated bonds are more reactive, and this is where the ozonolysis process comes into play.

Ozone creates a new chemical species when it interacts with triglycerides by breaking them up at their double bonds, resulting in the ozone’s oxygen atoms attaching to the carbon chain.

This process results in a decrease in unsaturated triglycerides as well as an increase in reactions produced by ozonolysis.

By measuring these fluctuations over time, Dr. Hinners and Dr. Lee deduced the amount of time that has elapsed after a fingerprint was left. 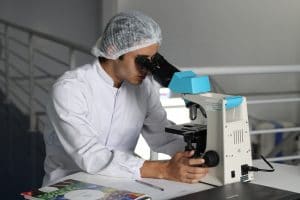 To test their theory, they assessed the chemical contents of fingerprints from three different individuals.

They tested some of the fingerprints immediately. Others, they left exposed for a period of several days, testing them intermittently.

Despite the small sample size, they believe that this method will drastically improve the accuracy of determining the age of the fingerprint.

Although more studies will be needed before this process can be used in court, it’s interesting to know that the technology exists.

And where it’s possible, a mystery author like me (or maybe it’ll be me!) is likely going to have a lot of fun trying to work this super advanced technology into a future book…

In the meantime, don’t miss my latest thriller PREPPER JACK.