In my latest thriller, Night Justice, Judge Willa Carson is horrified when she hits a man with her car.

She jumps out to help, but it’s too late. He’s not breathing and she can’t revive him.

Famous Restaurant Owner’s Wife Kills Pedestrian is the top click bait headline for every citizen journalist with a smartphone video looking to make it big on social media.

But is it true? 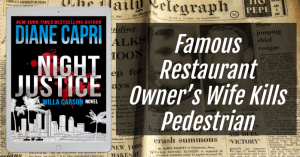 There are around 218 million registered drivers in the US. Of course, the more drivers there are on the road, the more likely it is that accidents and fatalities will occur. The National Safety Council estimated that in both 2016 and 2017, fatalities resulting from automotive collisions reached 40,000.

In an effort to counteract these staggering statistics, automakers and lawmakers are introducing self-driving vehicles to the road. Self-driving vehicles, referred to as AVs (autonomous vehicles), are not an idea of the future anymore. In fact, there may be some driving in your city! 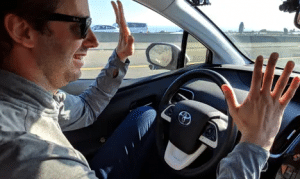 Waymo, one of the Leading AV companies, announced in July of 2018 that their AV vehicles had driven over 8 million miles on public roads. Although self-driving cars are autonomous, a person referred to as a safety driver typically accompanies the vehicle as a precaution. AVs are not currently available for the public to buy. Instead, companies such as Uber and Waymo have been testing AVs as taxi services or public transportation. In 2018 in Detroit, self-driving shuttles were used to transport students and tourists for short distances. Although the busses only went 20 mph, they were an important part of the testing process.

Self-driving cars have many potential bonuses, the biggest of which is to save lives. By eliminating reckless or distracted driving it is hoped that AVs will help reduce the number of automotive accidents each year. AVs also enable individuals with disabilities to transport themselves.

Self-driving cars are exciting for more reasons than just the practical ones. Volvo is experimenting with taking AVs to a whole new level by developing self-driving vehicles that allow occupants to sleep in a luxurious cabin while on the road. Wow! Pleasure or peril?! 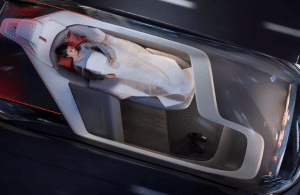 Despite the benefits of implementing AVs, they also present significant risks. As Willa Carson knows all too well, no matter who is driving, one mistake on the road can have disastrous results.

Self-driving cars depend on how well they are programmed. In March of 2018, a fatal crash involving an Uber AV resulted in the death of Elaine Herzberg after she was struck and killed while crossing the street. Although a safety driver was present in the vehicle, the driver was distracted when the accident occurred.

Would a self-driving car have prevented Willa’s accident that dark and stormy night? Read Night Justice to find out!