Secrets Beneath The Streets Of Paris

The Paris catacombs are a network of quarries and tunnels found beneath the historic city. Since its creation, the catacombs have served many purposes, from housing millions of deceased Parisians to acting as a bunker during World War II. These incredible winding tunnels still hold many of the city’s mysteries — including a few secrets of Jess Kimball’s past.

The catacombs were originally limestone quarries created in the 13th century for the construction of Paris’ monumental structures such as the Notre-Dame Cathedral and the Louvre. In the latter half of the 18th century, city officials saw the abandoned quarries as the solution to Paris’ overflowing burial sites. For several years wagons filled with human remains could be seen crossing the city at night. Priests followed closely behind praying blessings over the dead. Sounds like a creepy job doesn’t it? 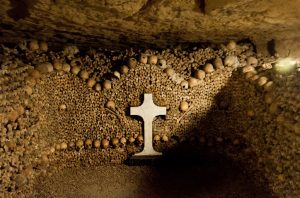 In 1810 efforts were made to make the site accessible to visitors. Bones that had previously been haphazardly dumped into piles were then stacked into formations and designs, grouping them according to their original burial sites. The catacombs have since been an irresistible attraction drawing thousands of visitors, some of whom are rumored to have never left alive.

This is the premise for FATAL PAST: In the catacombs beneath the city of Paris, Sam Sommers locates a long dead body of a young woman whose death was never solved. When Jess and Sam return to the maze of tunnels beneath the cobblestoned streets, they race against the clock to stop a monster still hiding in the shadows. 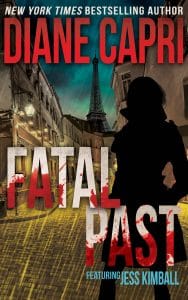 Due to the many risks, the public was eventually barred from entering the catacombs. In 2008 a small portion was reopened to the public. Upon entering, visitors pass beneath a doorway with the haunting inscription: “Stop! This is the empire of death!” This warning is not to be taken lightly. Just last year, two teenagers wandered the dark tunnels for three days before they were finally found. Fortunately, those who stay within the designated areas will likely be spared from a similar fate.

For some cataphiles, neither the law nor imminent danger are enough to stop them from exploring this hidden underworld. These illegal visitors sneak into the catacombs through secret entrances found in church crypts, subway tunnels and utility holes. 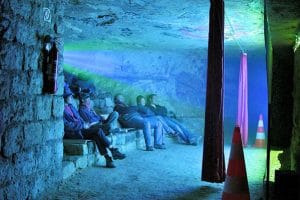 Some cataphiles are drawn to this dark subterranean world with creative ideas, building secret landmarks or uncovering hidden swimming pools beneath the city. In the 1980s police officers discovered a secret cinema and accompanying restaurant that had been furtively created.

But, Jess and Sam discover in FATAL PAST people lurking in the Paris catacombs who have criminal intent. Perhaps it’s not surprising that those with more sinister motivations are drawn to the anonymity that the city’s dark underbelly offers. In 2017 a group of thieves drilled a hole in a catacomb wall to steal 300 bottles of vintage wine from the cellar of a luxury apartment.

Would you visit the Paris catacombs? If you do – be careful, who knows who or what you’ll run into!

Jaycee Dugard: 18 Years in Captivity
Why Biotechnology Might Save Your Life