Missing in Wyoming: Jess Kimball Is On The Case

By Diane on April 20, 2017 in Beyond The Covers, Blog, Jess Kimball Thrillers, Justice

So, I have a new Jess Kimball novel coming out May 20th. It’s a thriller called Fatal Game, and I think you’ll love it. Fatal Game features our favorite vigilante reporter, Jess Kimball. Jess generally believes that the guilty rarely get their just reward. She’s firmly on the side of the victims. But what if the victim is wrongly accused? Which would mean a ruthless killer is still out there — a situation Jess cannot ignore. 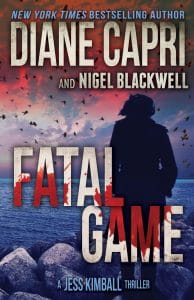 As Nigel and I plotted and wrote Fatal Game, another Jess Kimball story popped into my head. The only thing to do was write it down and share it with you! That exciting short read is Fatal Edge, now available everywhere! (As of April 20, 2017.) While you’re waiting for Fatal Game, grab Fatal Edge! 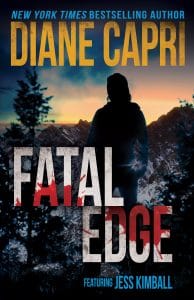 Fatal Edge is a thrilling short read that we can all read now, to kick off the excitement for next month’s Fatal Game.

In Fatal Edge, Jess Kimball’s assistant, Mandy Donovan fills in for Jess when a spoiled rich man’s girlfriend goes missing and he says he’s not to blame. Along with her new P.I. boyfriend, Mandy heads up to the ski resort in Wyoming where the woman was last seen and lands in the path of a killer. Can Jess get there before Mandy becomes the next victim?

“Full of thrills and tension – but smart and human too.”
— Lee Child, #1 World Wide Bestselling Author of Jack Reacher Thrillers

To stay in the loop about my new releases as they happen, make sure to
subscribe to my twice-a-month NewsFlash!