Lasers vs. Drones: Who Wins?

By Diane on January 10, 2017 in Beyond The Covers, Blog, Hunt for Jack Reacher, Hunt For Truth

In a fight between lasers and drones, who do you think would win?

You remember the power of lasers in Goldfinger. James Bond gives us a scare as we watch a powerful laser inch closer to his body. 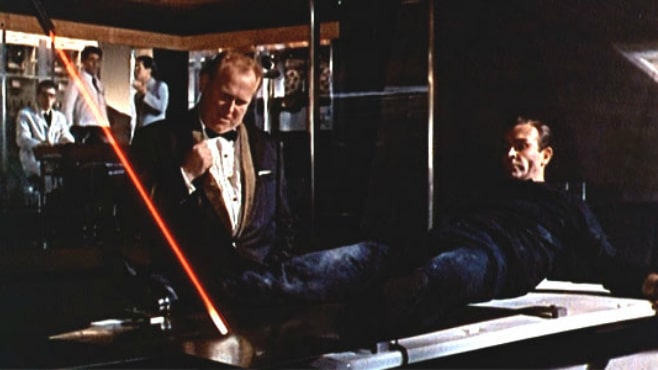 I follow surveillance technology news because it comes up often in my books. In my Hunt for Jack Reacher Series, FBI Special Agents Kim Otto and Carlos Gaspar are always being watched. Drones play a key role in the False Truth Mystery Serial, too. Drones are great for exploring on the interior of houses and small spaces where the eye can’t see (especially insect drones, as seen in the movie Eye in the Sky.)

So I got to thinking — in a fight between lasers and drones, do lasers always have the upper hand? Is there anything drones can do to defend themselves against the all-powerful laser?

The answer is surprising. Mirrors are drones’ secret weapons.

The Office of Naval Research says that covering drones in mirrors gives them very good protection from lasers. It’s not perfect, but it’s a simple and effective solution. Something called a dielectric mirror has many layers, which give it up to a 99.99% reflectivity.

One problem with this? The dielectric mirrors only work for a specific range of laser wavelengths. That means that the drone defense builder would need to know what kind of lasers the drone is likely to be combatting. You can read more about the development of this technology here.

For now, it’s safe to say that drones may continue to play a role in my books, with an awareness that as they become more common, the weapons against them become more creative, which means the drones themselves are constantly adapting. Which, the way I see it, means that the story is about to get a lot more interesting!

5 Ways To Live Like a Snowbird From Anywhere
Is Illegal Gold More Valuable Than Drugs?