By Diane on January 19, 2017 in Beyond The Covers, Blog, Heir Hunter, Hunt for Jack Reacher

As a crime writer, of course, DNA comes up all the time in my research and in my writing. It’s invaluable for solving cases, though it’s not infallible. 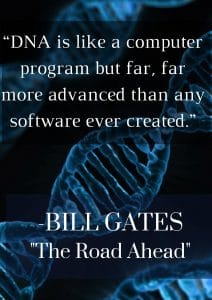 In Jack and Joe of my Hunt for Jack Reacher Series especially, DNA is a subject that comes up over and over, since the book is about similarities between Jack Reacher and his brother, Joe Reacher. The thriller I’m currently working on is about Michael Flint, Heir Hunter. Flint is a forensic genealogist and knows a thing or two about DNA.

DNA is frequently the subject of mind-bending news during my research.

Here is some of the latest evidence that DNA is like a computer program, except much more powerful:

DNA united a set of siblings when a Pensacola, Florida woman, adopted into a family with three biological sons, sent a DNA swab from her cheek into three DNA genealogy testing companies. Amanda Miller had always been curious about her biological family, but couldn’t get anywhere through her own research because Florida adoption records were sealed in 1962, the year of her birth. Her DNA analysis came up with a match though! It led her to a cousin in Atlanta, which led to discovery of her mother’s name. Her mother had passed away, but in the obituary, Miller found an email address for her oldest sister. Upon emailing the oldest sister, Linda Richards, Amanda Miller found out she had a total of ten siblings or half-siblings. Further proof came when Miller found that her siblings, like her, all have a crooked pinkie finger on their right hand.

Ethnicity is Encoded in our DNA?!

This piece of DNA news is one of those mind-bending ones I mentioned. According to researchers at the University of California San Francisco, there are “patterns in our DNA that reflect the shared environment and cultures of different ethnic groups.” When researchers looked at DNA of Mexican and Puerto Rican children, they found that only 75% of DNA differences could be attributed to genetic ancestry. In other words, researchers believe that 25% of the DNA differences resulted from  “different experiences, practices, and environmental exposures distinct to the two ethnic subgroups.” Examples include sensitivity to cigarette smoke, stress, and diet.

In Canada, law enforcement officials are now allowed to search DNA databases to find DNA matches that are similar to the exact DNA they are looking for, in order to find suspects in cold cases. The technique is a little controversial, as some civil liberties groups are concerned about tying innocent people to criminal investigations. Still, law enforcement believes that using familial DNA could help find murderers, other offenders, and could lead to exonerating those falsely accused.

So, you know in some form or fashion all of these DNA discoveries will come into play in one of my books, sooner or later. Right?