Dangerous Games of The Night Manager

By Diane on August 30, 2016 in Beyond The Covers, Blog, Hunt for Jack Reacher

Have you seen or read The Night Manager? It gave me a lot of dramatic insight into one of the topics touched on in my thriller Deep Cover Jack: arms dealing.

The six-hour miniseries is based on the novel by John le Carré. The Night Manager was a thrill to watch and is nominated for lots of awards. A former soldier named Jonathan Pine is the night manager of a hotel in Cairo. When he’s asked by a woman to copy confidential documents reflecting illegal international arms sales, he turns the documents over to authorities, which results in the woman’s death. Now, he feels responsible. Four years later, Pine is contacted by British Intelligence and enlisted to infiltrate and spy on an English billionaire suspected of international arms dealing. As IMDB puts it, “what follows is a very dangerous game of intrigue and deception.” 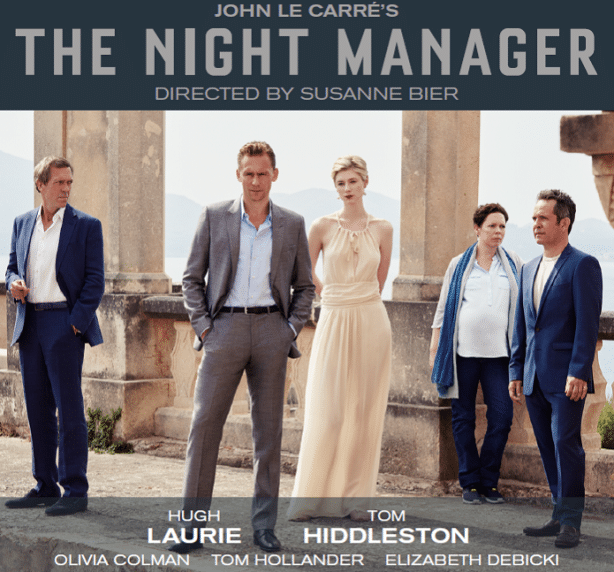 Already you may see some parallels between The Night Manager and Lee Child’s Persuader. Persuader provides the source material for my newest novel, Deep Cover Jack. In Persuader, Jack Reacher agrees to infiltrate an illegal drug ring.

Jonathan Pine in The Night Manager is recruited by rogue British Intelligence to go undercover to do the job, like Jack Reacher works off the books and undercover with a team of rogue FBI agents.

A look inside The Night Manager:

One critic sums up the business of arms dealing as displayed in The Night Manager this way:

“le Carré and Bier examine the games people play with each other to get what they need, and how far we’re willing to go to deceive for the greater good.”

How far will Agents Otto and Gaspar, and Susan Duffy go to get what they need in Deep Cover Jack?
To find out, you can find the latest book in my Hunt for Jack Reacher Series HERE.