Eagles Are Being Trained… To Do WHAT?!

We talked recently about how drones are a real threat to aircraft. In the United States, from the end of August 2015 until the end of January 2016, there were “519 incidents involving passenger aircraft and unmanned drones”! 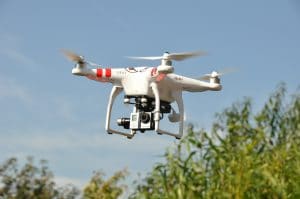 It’s a topic we brought up in False Truth: A Jordan Fox Mystery, that ended up leading to the thrilling conclusion of the 11-book serial.

So how can airports and government officials deal with this very real issue of recreational drones flying dangerously close to airplanes? There are laws against this sort of thing… but you know what some say — rules are made to be broken. Airports keep birds off runways by using scarecrows, loud noise-making devices, and even guns. But none of those methods work when it comes to drones.

But there is an inventive approach. Eagles. Believe it or not, eagles are being trained to take down drones!

Need proof that I’m not making this up?

Eagles are perfect for the job. They’re inclined to hunt prey by nature, and have keen eyesight working in their favor, and their talons can easily grab the machines.

While some are concerned that the drones could injure the eagles, an eagle handler says eagles have enough scales on their feet and legs to allow them to sustain a fight with a drone. And, nonprofit HawkQuest points out, eagles are creatures powerful enough to crush small mammals’ bones.

The decision as to whether or not to move forward with using eagles to help fend off drones has not been made yet. At this point, eagles are still in the training stage. If it’s determined that eagles won’t be hurt by the drones, this seems to be a very clever approach to aviation safety!

Giveaway #3 for Get Caught Reading Month!
The next time you board a flight, tip your hat to Florida