By Diane on December 12, 2015 in Beyond The Covers, Blog, Hunt for Jack Reacher, Saturday Special

I love these little minions for their honesty!
Here’s one of their latest truisms: 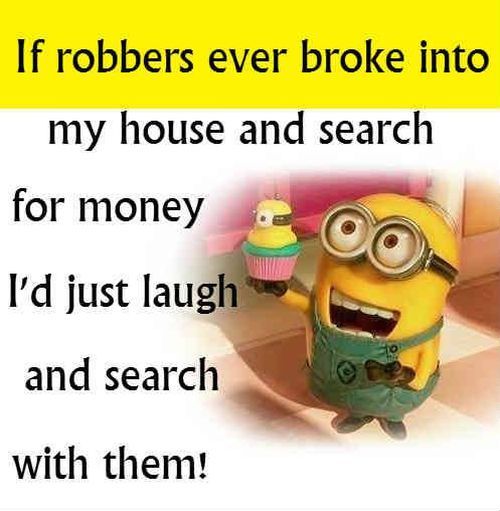 Are you a cash stasher? I’m not. But if I was, I like to think I’d be a law-abiding cash stasher.

As a fiction writer, I do tons of research to make sure every detail in my books is definitely plausible. On my blog this week I revealed more details about the groups that help to quash corruption in the military. In one real-life case, a soldier accused of taking bribes had allegedly hidden cash in stereo equipment and shipped it back to the United States!

That, of course, is illegal as well as immoral.

Keeping the U.S. military corruption-free starts at the bottom, by attempting to instill values in soldiers early on in their training.

Take West Point, for example. Jack Reacher graduated from The United States Military Academy at West Point, where conduct and discipline are extremely serious. West Point demands a strong moral code, in part to train students to avoid incidents like those referenced in my newest Hunt for Jack Reacher thriller Jack and Joe, and Lee Child’s The Enemy.

How does West Point Demand Honesty?

Students at West Point are required to memorize this:

Upstanding moral character is the aim. Should we institute and enforce similar honor codes in our public schools to inspire strength of character in all our citizens?

Thwarting Corruption In The Military
#XmasAudio For Free Audiobooks Daily!