By Diane on August 4, 2015 in Beyond The Covers, Blog, Hunt for Jack Reacher

Have you read the book Jack Reacher’s Rules? It’s a handbook of sorts, full of helpful tips and nuggets of wisdom inspired by the way Lee Child’s Jack Reacher lives off the grid and operates without dying.
So far, at least.

If you’ve read books in my Hunt for Jack Reacher series, you know hunting Reacher is deadly. FBI Special Agent Kim Otto’s assignment presents tough challenges as she tracks Reacher. Here are four of the “rules” Otto uses to do her job and stay alive:

1. Watch the subject’s pulse to identify the right emotional triggers and get the answers you need.

Kim Otto has developed her skills. She can measure heartbeat visually by watching the pulse in the neck. An increased pulse indicates nervousness. Body language is a backup measure. Otto also looks for excessive sweatiness, shaky legs or hands, lack of eye contact, the subject sitting on the edge of a chair, shifting weight from one foot to another, licking the lips, wiping hands on clothes to remove sweat, fidgeting with small objects, rapid blinking, scratching or wiggling the nose, and raising the shoulders. All signs of nerves, which indicate that she’s nudged a pressure point. When she finds it, she pushes harder.

2. Don’t be stupid. Which seems obvious, but too often, “stupid” is something Otto doesn’t discover until it’s too late. 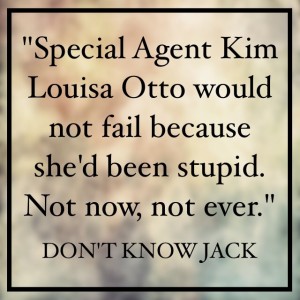 3. Always assume a third party is watching, or listening, or both.

To minimize the listener’s access to your activities, turn off GPS, create conflicting noises such as radio, TV, a bathroom fan, or a crowd of people, while speaking in a low voice. The listener can identify your voice and remove everything else, of course. But that takes time and additional equipment, which gives you room to move.

4. Ignore the fear and do it anyway.  This one might violate Rule #2 from time to time, right?

One Response to Kim Otto’s Rules: Lesson I