Would Jordan Fox plagiarize? Surely not, right? The star of the Hunt For Truth Serial is a hardworking journalist, and honesty is her middle name.

Merriam-Webster Dictionary defines plagiarism as the act of stealing and passing off (the ideas or words of another) as one’s own.

But 17-year-old author Helene Hegemann might have a bone to pick with those who say plagiarism is a problem.

Helene Hegemann is an author in Berlin who published, to wide critical acclaim, a novel called Axolotl Roadkill. Maybe you’ve heard of it. Though she’s only 17 years old, the novel isn’t her only success. According to the New York Times, she’s also written a screenplay and had it staged, and she’s had a movie released in theaters. 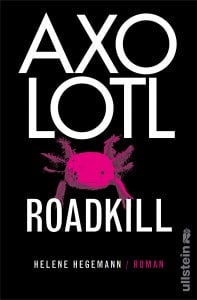 Problem is, chunks of the novel are taken from another novel called Strobo.

…Or is it a problem?

Despite the stolen material, and despite a juror saying the judging panel knew about the accusations, she still became a finalist for a $20,000 book prize at the Leipzig Book Fair.

17-year-old Hegemann explains how she sees it:

“There’s no such thing as originality anyway, just authenticity.”

She says both new and old sources of media are so flooded with information nowadays, that as long as the author/writer/creator uses multiple sources and references of inspiration to mix the material, it shouldn’t be considered plagiarism.

There’s been some discussion about this recently in the journalism business too, as Fareed Azkaria, CNN anchor, used paragraphs from scholar Fawaz Gerges almost word-for-word, without attribution.

To me, plagiarism is nothing to be taken lightly. A writer must draw the line between using someone else’s work for inspiration, and using it verbatim or even almost verbatim. Making money by stealing another’s work is, well, simply not okay. Pirates steal my work all the time. I don’t like it. Not even a little bit.

The director of a prestigious journalism school in Paris seems to agree with me. Bruno Patin commented that “Plagiarism is a very serious affair in journalism,” in response to the executive director of the school, Sciences-Po university, facing accusations of plagiarism.

Regardless of whether plagiarizing becomes acceptable behavior or not, I don’t think Jordan Fox will ever be inclined to lift work from other sources without attribution.

What do you think? Is plagiarism inevitable in the digital age? Or should it still be monitored and punished?

What’s your name in aviation lingo?
7 Ways To Celebrate This Week’s New Release

6 Responses to Would Jordan Fox Plagiarize?