Could Your Face Be In A Database?

In the future, you may not need a PIN at the ATM. Technology is advancing to the point that a machine could scan your face, immediately know who you are, clear you for fraud, and allow you to make your transaction.

I started thinking about this technology when I was writing Jack in the Green earlier this year. There’s a passage in Chapter 3 where Carlos Gaspar recognizes a woman’s face, but can’t quite place it. Who is it?  Jenny Lane. But why Gaspar remembers her is interesting, too, isn’t it?

In addition to convenience at the ATM and jogging a tired memory, facial recognition technology could be used to eliminate voter fraud, to search foreign travelers for face matches with terrorists, and to identify faces within crowds. Just what Gaspar needed. And get this: there’s at least one company looking into using the facial recognition software at work, so they can keep accurate track of the comings and goings of employees!

So how exactly does this facial recognition software work? Well, every face is made up of different peaks and valleys. There are 80 key points on the face called “nodal points”. Software can use these points to measure things like the depth of the eye sockets, the length of the jaw line, the distance between the eyes, and the width of the nose. 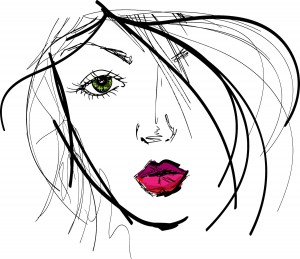 These nodal points are probably what Gaspar was picking up on as he looked at Jenny’s face. Except he didn’t know they were called nodal points. To him, it was…

“A certain lilt to her nose, crinkles around her eyes as she squinted into the sun, dimple in her chin.”

But that’s not all. Facial recognition software can go BEYOND nodal points and recognize a person’s skin texture… which would even make it possible to tell the difference between identical twins. Identical twins have identical DNA, but not identical fingerprints or skin texture.

The uses for this kind of technology are endless. Imagine the fun a mystery author could have as the technology advances….

Then again, the whole thing does raise quite a few concerns. In the future, will every single person’s face be entered into a database? Could someone gain access to our life history just by analyzing our facial features? The answers are yes and yes.

What do you think? Do you see more pros or cons in the development of facial recognition technology?

Saturday Special: Let’s Indulge Ourselves!
How To Avoid Virtual Kidnapping

2 Responses to Could Your Face Be In A Database?