By Diane on February 4, 2014 in Behind The Book, Beyond The Covers, Blog

“There are books that make you miss your stop on the subway and books that don’t.”
-Lee Child

The creator of Jack Reacher is, as the Brits say, brilliant, isn’t he? I had the pleasure of joining my friend Lee Child at the Key West Literary Seminar last month, where he made the above remark during a Q&A session.

The Key West Literary Seminary, or KWLS, is a chance for readers from around the country to join writers for discussions, lectures, and even parties. I attended for all 3 reasons, as well as to reunite with some of my writer friends who I don’t get to see as often as I’d like.

The theme of this year’s conference was “The Dark Side”, with a focus on mystery, crime, and the literary thriller. Reason #5 for me to attend!

Since attendance was limited, you might have missed KWLS. Here are some of my most memorable moments from the long weekend.

When I arrived in Key West Thursday night, it was COLD! And the evening’s cocktail party was outside! Ack! Not exactly what I expected from the southernmost point of the United States. I coped by wearing a sweatshirt right over my cocktail dress to the party on the grounds of the Audubon House, and, of course, a little red wine helps, too.

Back at the seminar the next morning, Lee Child was a featured speaker. He explained why he thinks suspense stories are the best type of story: 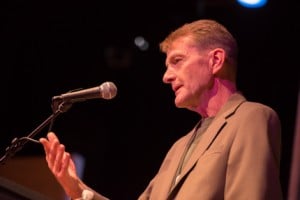 “Something hardwired in the human brain loves fear, danger, and peril, especially when we know it will all work out OK.”- Lee Child

Later in the day, Percival Everett, Alafair Burke, Michael Koryta, and my neighbor Michael Connelly took the stage. They spoke about the creative process.

“I knew I wanted to be a crime writer since the age of nineteen. I went into journalism as a means to an end, and that set me apart from other reporters. I always had an eye out for details to use in novels.”- Michael Connelly

Elizabeth George also remarked on the importance of fact in fiction. She said that she often feels she lacks a vivid imagination, and needs to walk around a place and find a seed of an idea. This is an approach I’ve used, too. Elizabeth George’s editor calls it “topographic gumshoeing.” I call it fun.

Friday night’s cocktail reception was at San Carlos Institute. The building was founded in 1871 by Cuban exiles. Which made it a little strange to see Darth Vader outside… playing the banjo. 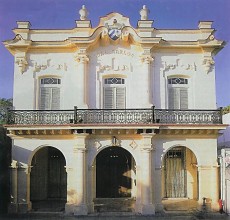 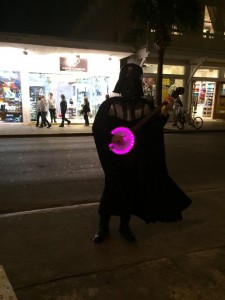 Once again, it was a very cold night, at least for this Floridian! My hotel had neither heat nor extra blankets… a complaint which I’m sure sounds pretty pathetic to those of you who were trapped in the heart of the Polar Vortex! Still, for me, it was a restless night. But I suppose “chills” are appropriate at a seminar where we were discussing “chilling” stories, right?

The next morning began with more sunshine, more warmth, and a possible omen — I had the door open and this little bird flew in! He visited about five minutes and flew back out. A fellow author, Christine Nolfi, suggested it means good fortune will fly through an open door of my life. I hope it’s true! 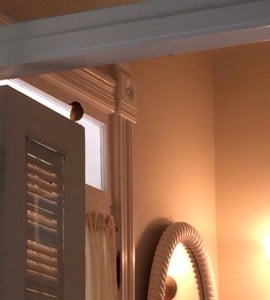 Sunday afternoon there was a session that was free to the public. John Banville, aka Benjamin Black, the author of crime novels set in 1950’s Dublin, left us with some inspirational words:

“A sentence can always be better. That’s the point of art. You keep striving to make it better, to get the perfect ringing sentence.”- John Banville

Writing is, by nature, a solitary career. And reading is a solitary hobby. Perhaps that’s one of the reasons it attracts us introverts. But it also means we enjoy occasional events like this, which offer us a respite from solitude and contact with others in our tribe.

The next event on my calendar is SleuthFest in Orlando at the end of this month. I’ll be presenting there twice and enjoying the opportunity to meet many of you. Leave me a comment if you’re going to be there — I’ll keep an eye out for you!

One Response to Suspense In Key West