Friendship Lessons From The Beatles

What were you doing in 1962? Are you old enough to remember? Were you even alive?

In 1962, Ringo Starr was meeting Paul McCartney for the first time. They were in the process of becoming bandmates. And lifelong friends. Of course, they had their ups and their downs, but it’s 2014, and now, 52 years later… they’re still at least friendly enough to perform on stage together. 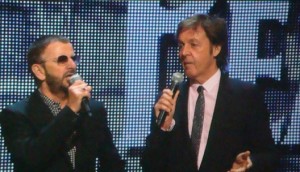 Do you count yourself lucky enough to have any friends today from 1962?

Perhaps the Beatles’ most famous friendship was Lennon-McCartney. (Or McCartney-Lennon, as some would have it.) They were close writing partners, unique as far as songwriting collaborative pairs go, in that they wrote both music and lyrics together. Lennon called it “writing eyeball-to-eyeball.”

Lennon and McCartney were so connected, they stood by an agreement they made when they were teenagers that any song either one of them wrote would be credited to both of them, whether or not they collaborated to write it.

McCartney and Starr weren’t “eyeball-to-eyeball” close like that. From what I can tell, they got along as bandmates, minus a few moments of hurt feelings and frustrations, as are bound to happen in any multi-decade friendship.

After Lennon’s murder and George Harrison’s death, fate tested the bond between McCartney and Starr. Would friendship between the two remaining Beatles survive?

After years of solo careers, McCartney and Starr began to collaborate again. Starr recorded for McCartney’s 1997 album “Flaming Pie.” McCartney contributed vocals on a couple of Starr’s albums. They’ve reunited for several concerts and other appearances since then. As recently as January of this year, the two performed on stage together at the Grammys to celebrate 50 years since the Beatles’ first appearance on American television.

52 years of friendship and counting.

Lennon and McCartney wrote that song together, but they wrote it in a way that would forever embed Ringo into it. As the story goes, Lennon and McCartney intentionally made the last note of the song one that only Ringo could sing, so that he would be an integral part of the piece.

Until then, I think I’ll celebrate the friends I have now. How about you?

We Are The Twelve
Saturday Special: What’s Your Score?

30 Responses to Friendship Lessons From The Beatles