Don’t Know Jack: Behind the Book

The Hunt For Reacher 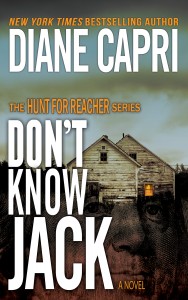 It’s been a while since we first met Lee Child’s Jack Reacher in Killing Floor. Fifteen years and sixteen novels later, Reacher still lives off the grid, until trouble finds him, and then he does whatever it takes, much to the delight of readers and the dismay of villains. Now someone big is looking for him. Who? And why? Hunting Jack Reacher is a dangerous business, as FBI Special Agents Kim Otto and Carlos Gaspar are about to find out. Otto and Gaspar are by-the-book hunters who know when to break the rules, but they Don’t Know Jack. Reacher is a stone cold killer. Is he their friend or their enemy? Only the secrets hidden in Margrave, Georgia will tell them.

Now, Behind the Book:

Readers ask me where I get my ideas. I usually tease, “I order them from ideas.com.” The truth is I don’t always know. Ideas spark, kindle my interest and sometimes explode into a novel or a series of novels. But in the case of Don’t Know Jack, I do remember the moment.

A couple of years ago, I was chatting with Lee Child at a book event in New York about his iconic character.

Lee’s a lot bigger than me. And he writes violence like a man with experience. I’ve always thought him a gentle giant, but …. I backpeddaled a bit.

“Right. But where does Reacher live?”
“Wherever he wants,” the tall guy said. I thought I dectected a slight challenge in his tone.

I backed out of arms’ reach before I pressed on. “He waits until trouble finds him and then he wipes the floor with the bad guys. Perfect. But what’s he doing between books?”

“Reacher’s killed a lot of people by now. Sixteen books. A lot of bodies. Surely someone wants payback, don’t you think?”

Lee leveled the patented Reacher stare. “Who in his right mind would go looking for Reacher? You?”

Right. Only an idiot with a death wish — or an FBI agent who knows nothing about Reacher’s, er, talents — would undertake such a foolhardy quest. Even then, she wouldn’t do it if she had a choice.

But matching wits with Jack Reacher, now that would be interesting, I thought, even though it could very well be deadly. Then again, the bigger they are the harder they fall. Whoever takes Reacher down will become a legend in some circles.

What if a determined, ambitious woman …..

That’s the backdrop behind Don’t Know Jack, my new Kindle suspense novel. (That’s right. Don’t Know Jack is only available as a Kindle eBook for $5.99. Don’t have a Kindle? No problem. You can read Don’t Know Jack on any device or computer. Instructions HERE.)

I hope you enjoy this first installment of the new Hunt For Reacher series. Be sure to stop back and let me know what you loved, what you hated, what you’d like to see more of in the second book. Meanwhile, have you read The Killing Floor? Did you know anything about counterfeiting before you read Reacher’s debut? What’s your favorite Jack Reacher tale? Why?

23 Responses to Don’t Know Jack: Behind the Book