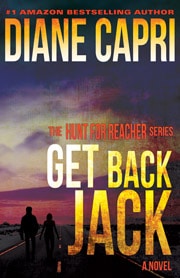 New! Get Back Jack

FBI Special Agents Kim Otto and Carlos Gaspar’s off-the-books assignment leads them to the surviving members of Jack Reacher’s elite military unit. Five years ago, Reacher sorted and destroyed a team of arms dealers in Lee Child’s Bad Luck & Trouble before he moved on. But he made mistakes. Now, his bad luck and trouble legacy plunges Otto and Gaspar into the minefield of a grudge war between Reacher’s fearless old friends and chilling new enemies.

When his enemies take women and children hostage for ransom, Kim’s relentless pursuit leads her deeper into the deadly war Reacher failed to finish. Mercenaries and Kim’s unwavering heart push her through — until she meets the wrong woman with nothing to lose. 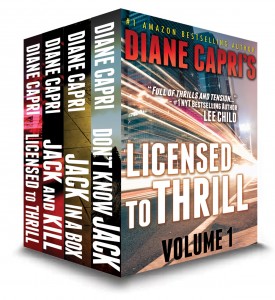 FBI Special Agents Kim Otto and Carlos Gaspar are on The Hunt For Reacher. Will they find him? Or die trying?

Full of thrills and tension – but smart and human too. Kim Otto is a great, great character– I love her.”
Lee Child, author of 17 International Bestsellers featuring Jack Reacher.

The Hunt for Reacher series begins. FBI Special Agents Kim Otto and Carlos Gaspar have received a special off-the-books assignment: build a secret file for a secret purpose. Target: Jack Reacher. You first met them in Don’t Know Jack. You followed them in Jack in a Box and  Jack and Kill shows them more Reacher than they ever expected to see. Read more…

The Hunt for Jack Reacher Series has received more than 200 5-Star Reader Reviews and praise from Reacher’s creator, Lee Child! 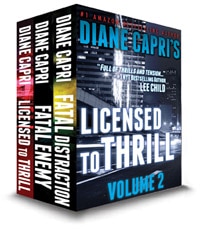 Relentless victims’ rights advocate Jess Kimball and Jack Reacher both deliver justice when the legal system fails. Reacher waits until trouble finds him and then he does whatever it takes. But Jess pursues legal justice and draws lines she will not cross. Can she win against killers who refuse to follow the rules? Read more… 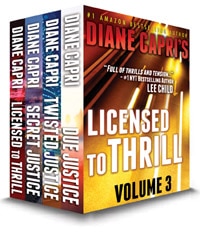 Where Justice Rules! Federal Judge Willa Carson’s rules may be different from the letter of the law, but these are the rules we wish for when people we love fall between the legal gaps. Families in paradise mean murder all too often. But when you’re in trouble, you’ll want Willa on your side! Read more…

Diane Capri is the bestselling author of eight novels and a recovering lawyer. Diane says she writes mystery and suspense for the same reason she reads: to have fun, find out what happens, why people do what they do, and to restore order to an unjust world. Readers say her books emphasize wry humor and everywoman’s inherent strength and self-reliance. Diane’s books are translated in multiple languages. She and her husband are snowbirds who divide their time between Michigan and Florida with their beloved miniature schnauzer, Miki. Diane loves to hear from readers. Contact her HERE

Diane writes like the maestro of the jigsaw puzzle.” – David Hagberg

Swift pacing and ongoing suspense are always present…Willa is a likable protagonist who uses her political connections for a good cause…Readers should eagerly anticipate the next [book].” Top Pick – Romantic Times