So what is Prepper Cuisine? Find out!

If you’ve read books in my Hunt for Jack Reacher series, you know Reacher is an expert at living off the grid. With an estimated 3 million Preppers living in the US, he’s not the only one.

A ‘Prepper’ is someone who prepares for emergencies. The level of preparedness and types of emergencies that Preppers prepare for can range from natural disasters to fears of Post-apocalyptic situations.

Preppers define themselves as people who take the initiative and have a strong sense of self-responsibility.

Ultimately, they seek to have the necessary equipment and knowledge to protect themselves and their loved ones from peril in unexpected circumstances. 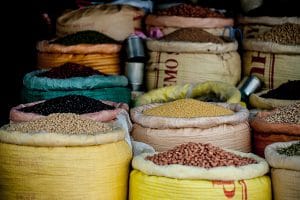 A core component of the Prepper lifestyle is obtaining enough food and drink to last through a crisis.

Collecting several months to a year’s worth of supplies is especially important because grocery stores generally only have enough stock to last a few days. Since fresh produce has a short shelf-life, many Preppers often store massive stocks of canned goods and dried foods. Survivalist food is often stereotyped as offering function over flavour. However, some Preppers have taken survivalist cuisine to the next level.

A wide array of Prepper cookbooks and recipes can be found online, offering meals that use simple ingredients and limited equipment.

One of the challenges Preppers face is not being able to rely on modern preservation methods such as refrigeration. This means that Preppers who wish to have access to homecooked meals must learn a variety of ways to preserve food. Preppers freeze-dry or dehydrate vegetables and fruits. Other items can be preserved using more creative methods such as storing eggs in ashes. 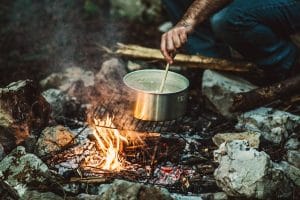 Most modern cooking relies on electric stovetops or microwaves where temperature can be regulated. Moreover, many modern recipes require a complex list of cooking tools.

Preppers, on the other hand, have learned to simplify cooking to its most basic elements, often referring to the practices of Pioneers who cooked while on the trail.

When on the go, Preppers must be able to easily carry all of their equipment, meaning they may have to cook with little more than a knife and pot.

Unlike other foodies who may want to demonstrate cooking skills, a key aspect of Prepper cooking is secrecy. Rather than snapping shots of their meals to post on Instagram, Preppers learn ways to conceal the food stash. Choosing to cook with spices and methods that conceal aromas is one method of concealment.

What say you? Do you have the skills to cook like a Prepper?

Here’s a fun tool to use to help you calculate how much food you will need to provide for your family in the event of an emergency: https://readynutrition.com/resources/category/preparedness/calculators/ 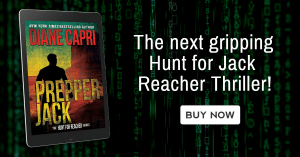