Missing children is a subject that pervades all of my Jess Kimball books. It’s a devastating topic, of course, but it’s what drives Jess Kimball. She won’t rest until she’s found her son who was kidnapped as an infant. Jess Kimball’s job as an investigative journalist for Taboo Magazine keeps her fighting along the way for victims’ rights.

On October 3rd, 2011, Deborah Bradley and Jeremy Irwin encountered every parent’s worst nightmare. Their ten-month-old daughter was stolen from her crib in their family home within  3600 blocks of North Lister Avenue, Kansas City. 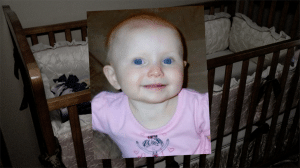 Jeremy Irwin reportedly returned home from work at 4 a.m to discover the front door unlocked and lights on. After realizing that his daughter was missing, he called the police.

Authorities were immediately concerned since infant kidnappings are rare. An Amber Alert was issued for baby Lisa and investigators began a thorough search of the neighborhood. Detectives combed nearby fields and drained wells to no avail.

As if often the case with missing children, eyes turned to Lisa’s parents. Suspicions were heightened by the fact that Lisa’s mother had been drinking with a neighbor the night her daughter went missing. Due to her intoxication, Deborah did not remember if she had last checked on her daughter at 6:40 p.m, or at 10:40 p.m when she went to bed. Deborah passed a lie detector test and the couple was eventually cleared of having any involvement in their daughter’s disappearance. 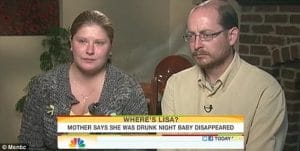 There were a series of eerie clues, however.

The same night Lisa’s disappeared, three of the family’s cell phones also went missing. The cell phones were discovered close to the family home shortly after investigators began their search. A local handyman, John Tanko, was interviewed by police after his girlfriend reported that she had been called by one of the missing phones. Tanko cooperated with the police and was not considered a suspect.

Neighbors reported seeing a man carrying an under-dressed baby that evening. This lead turned out to be another dead end after the same man was tracked down and questioned.

Other unsettling findings in the case were burnt baby clothes discovered in a neighborhood dumpster, and a cadaver dog that smelled something in Lisa’s parent’s bedroom. 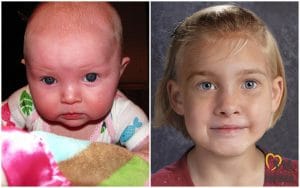 Over the last seven years, hundreds of other tips have poured in, totaling over 500. In 2018 alone, police have received another 19 tips.

Lisa’s parents have recently spoken publicly after the National Center for Missing and Exploited Children released a new age progression photo of what they believe Lisa might look like as a seven-year-old. Lisa’s parents remain hopeful that their daughter is still alive somewhere. They hope that the recent age-progression photo will help someone recognize her.

Do you know what’s in your car? Part 2
Accidents Happen Part #1