As you may know, I went on a Willa Carson writing spree earlier this year. I published three exciting short reads: False Justice, Fair Justice, and True Justice. It had been a while since I wrote a Willa story in her Hunt for Justice Series, and for whatever reason, she was calling my name. I had several stories in mind for her, so I wrote them all down and made them available for you, releasing them one-by-one as they were finalized. But now that those three tales are out there, I thought it would be nice to bind them into a collection for you. I also wanted to include Cold Justice as well — the most recent Willa Carson story before these three.

So now I’m pleased to present to you

A new collection of these Willa Carson exciting short reads.
Available Now in eBooks and Paperback! 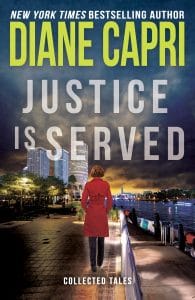 Each of these mysteries is short enough to be read in one weekend, or one day, or maybe even one sitting — depending on how long your “sittings” are! I designed them that way for several reasons. Personally, I enjoy switching up the rhythm of what I’m reading. Just like I enjoy reading some fiction and some nonfiction, I enjoy reading some books that are more long-form, with some faster-paced, straight-to-the-point stories mixed in. Frankly, I also loved the idea of having these four stories in one collection.

Below are synopses of each of the books within this collection.

A car stranded in the road. A corpse slumped in the front seat. A gunshot wound to left temple. The scene is surreal, the execution ruthless, the victim far from innocent.

Local authorities want this case put away fast because it’s bad for their tourism business. Willa sees what the cops don’t, and she is not about to play along to get along.

The rugged, frozen landscape is not her beloved Tampa sunshine and palm trees, but Judge Willa Carson is always on the Hunt for Justice.

Judge Willa Carson’s friend Ursula Westfield is living the good life. Her career as a broadcast journalist is on fire, she finally found a good man to come home to, and her new Manhattan apartment is the stuff of dreams.

When a stranger sends her a chilling but cryptic email about a newly nominated Judge in her hometown, she knows she should ignore it. Secret sources armed with conspiracy theories were nothing but trouble. Still, she can’t seem to shake the feeling that there’s something amiss about Judge Aaron Michaels.

Driven by an insatiable quest for truth and a desire to do the right thing, she heads back to Tampa and comes face-to-face with a killer. But Judge Willa Carson is on her side and she is always on the Hunt for Justice.

When a young reporter assigned to cover Judge Willa Carson’s courtroom for the local television station is sent on a fact-finding mission, he never expects to find a body. Residents of a small Florida town are suffering from a strange, debilitating illness. A whistleblower claims the local carpet mill is engaged in dumping toxic chemicals into the water supply. Uncovering the truth may cost the reporter his life, unless Willa Carson can save him.

Ginny Richards has a great new job working for wickedly smart Federal Judge Willa Carson, and she couldn’t be happier. After a rough patch and an ugly break up, she’s finally making new friends and her career is on the upswing. But when she invites her new workmates to see her moonlighting as a jazz singer at a local club, she never expects that a night of music and merriment will end in murder.

Buy the collection from the retailer of your choice here:

What Happens If Lightning Strikes A Plane?
5 Reasons To Visit Mackinac Island