This weekend, jets are going to soar over Tampa Bay. It’s  Tampa Bay AirFest 2014, an impressive display of aerial accomplishments at MacDill Air Force Base. After a two year absence, AirFest is back!

The event draws large crowds of about 150,000 over the two days. It’s a special weekend because MacDill opens its gates to the public. As someone who has been on the base, I know that this is a wild exception to the rules – on a typical day, the base entrances are guarded by armed personnel and other security measures. 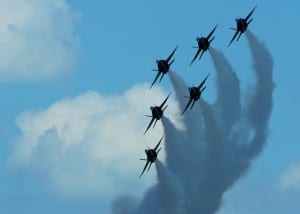 Only four bases in Air Mobility Command will host an air show this year, and MacDill Air Force Base in Tampa is one of them.  In addition to performances by the Blue Angels and the Thunderbirds, Tampa Bay AirFest includes civilian demonstrations and various aircraft on the ground. In fact, this year, there will be more civilian demonstrations than in years past in an effort to be more fiscally responsible. Because the show’s budget was ordered by the Department of Defense to be cut by 25 percent, MacDill officials have even reached out to the community to provide services and products for free. And the community has responded with gusto, eager to see this American tradition continue.

Col. Scott DeThomas told tbo.com, “As we prepare for the big weekend, it is important to remember what a special year 2014 is for the Tampa Bay community and aviation. In January, we celebrated the 100-year anniversary of Tony Jannus’ inaugural flight from St. Petersburg to Tampa. Also in January, MacDill Air Force Base celebrated the 20-year anniversary of the establishment of the 6th Air Mobility Wing.” 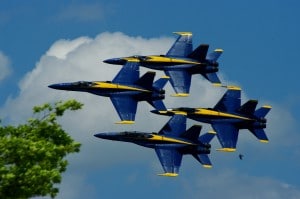 This year’s AirFest underscores the international search for Malaysia Airlines Flight 370. At the moment, we have a heightened interest in all aspects of aircraft technology, tracking, and training. The world is wondering how, in a day and age when we can carry 200,000 pounds of fuel through the sky and transfer it to another plane mid-flight, the skies have managed to lose a massive Boeing 777.

Unfortunately, Tampa Bay AirFest probably won’t answer that question. But it will provide some insight as to how the search is being conducted. Among the aircraft on display at MacDill will be military search and rescue helicopters, like the kind being used to scour the Indian Ocean for possible wreckage from Flight 370.

I know all of you join me in sending sentiments of sympathy to those who have lost contact with loved ones in Malaysia Airlines Flight 370, and gratitude to service men and women who are using their highly specialized skills to do everything they can to provide answers.