We’re suckers for celebrities and contests and stories, aren’t we? The Oscars are still a month away, but it seems everyone is already making their predictions. Have you caught Academy Awards fever yet? Do you think you will? 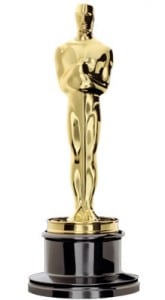 Here are the movies nominated for Best Picture:

The nominations started me thinking about villains and heroes and most of us who, for better or worse, fall between the extremes. When I read or write a book, I ask myself who the good people are. My books always have good people and villains. Or at least, people who are mostly good and mostly villains. Mainly that’s because I prefer to believe that real people are mostly good. How about you?

Consider American Hustle starring Christian Bale, Amy Adams, Bradley Cooper, and Jennifer Lawrence (all of whom are nominated for acting awards in the same movie). American Hustle keeps you wondering – who are the bad guys here? The con artists? The mafia dudes? The politicians, or the cheating spouses? All or none of them?

Hollywood loves a strong villain fighting a superhero, but in this film, no one wore white or black hats. This movie is a morally ambiguous comedy, which sounds like a contradiction, too, doesn’t it?

So how did American Hustle blur the lines between good guys and bad guys? Quite simply, the characters are all pretending to be something they’re not. Aha! Does everyone in life play a role? Or does that happen only in stories?

For example, are the con artists in the movie bad guys? Or are they good people forced to play a role by life’s circumstances? Christian Bale’s character justifies his actions, saying, “As far as I could see, people were always conning each other to get what they wanted.”

In other words, he’s saying we’re all the same and no one is all good or all bad. There are no villains and no superheroes. Do you agree? And if you don’t, what tips the scales for you?

Jennifer Lawrence shows us the point again. She’s ditzy and materialistic, but she’s honest. At one point in the movie, her character is talking about perfume, and says she’s heard that the best perfumes supposedly have one component that’s rotten or sour. Later, she describes her very flawed marriage similarly, saying, “It’s like that perfume that you love and you keep coming back for it, even though there’s something rotten in it.”

Lawrence has summed up the movie’s point: Each and every one of us is flawed, and that’s the way we like it. There are no superheroes. At least, there are none in this American Hustle.

Do you enjoy a morally ambiguous tale like this one with Lawrence and Bale? Does it help you to consider life’s contradictions? Or do you prefer a story where the good guys and bad guys are easy to distinguish and the good guys win?

Many moviegoers like moral ambiguity, it seems. American Hustle’s reviews have been positive and award nominations plentiful. In addition to Best Picture, American Hustle is also nominated for Costume Design, Directing, Film Editing, Production Design, and Writing of Original Screenplay.

So have you made your Academy Awards predictions yet? There are still quite a few movies I’d like to squeeze in before the Oscars air on March 2nd. What’s on your viewing list?