Did you know that your Christmas might be very different if not for Washington Irving? He came to my mind recently because of that TV drama on FOX, “Sleepy Hollow.” It is, of course, inspired by Irving’s story “The Legend of Sleepy Hollow” published in 1820.

When Irving wrote “Sleepy Hollow,” I’m sure he had no idea it would make a comeback in pop culture in 2013! But I wonder if Irving had any idea that something else he wrote in that time period — his notes about holiday traditions abroad — would have so much influence on American tradition today?

When Irving was born in New York City in 1783, New Year’s Day was the only holiday celebrated in the winter there. But that all changed after Irving moved to England in 1815. 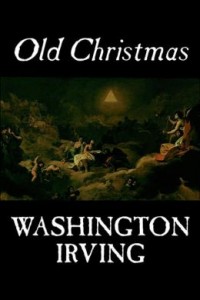 Over the next five years, he would pen the essays that make up the collection known today as “Old Christmas”. His essays were reflections on his observations of English holiday traditions that he saw slipping away from popularity there. They were rituals that now have become mainstream in the American Christmas tradition.

For example, in Irving’s short essay “The Stage Coach”, he references going home for the holidays:

[The children] were returning home for the holidays in high glee, and promising themselves a world of enjoyment. It was delightful to hear the gigantic plans of pleasure  of the little rogues.

In the same essay, Irving observes the English tradition of decorating homes:

The housewives were stirring briskly about, putting their dwellings in order; and the glossy branches of holly, with their bright red berries, began to appear at the windows.

The Yule log and Christmas candle were regularly burnt, and the mistletoe, with its white berries, hung up, to the imminent peril of all the pretty housemaids.

Irving also lists several games that were played on Christmas Eve in England that have either faded from American tradition or never made it overseas. Ever heard of Hot Cockles or Snapdragon? Keep an eye on the blog for an upcoming post on those games!

I would love to hear some of your holiday traditions. As always, feel free to leave a comment, and thanks for reading!

Get Back Jack Now In Paperback!
Cheers! Try The Season’s Best Cocktails Yet?