We’re kicking off a new feature today called Beyond the Covers. 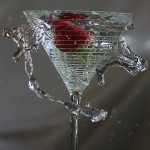 The plan is to branch out a bit. Be a little frivolous. Make a splash! Get down with guest posts, movies, genres, travel, wine, coffee, beaches, dogs, photography and whatever strikes our fancy. If you have suggestions for topics or if you’d like to guest here, leave me a note in the comments or send me an e-mail. Love to hear from you, always.

Our first guest is Larry Thornberry, a Tampa writer. Larry discovered journalism in his late twenties and hasn’t done a day’s work since. His writing — on history, politics, baseball, dogs, wine, movies and television, country music, cultural trends, military matters, and countless book reviews — appears in many local and national publications, including “The  American Spectator.” Here’s Larry’s tribute to one of his favorites.

Two anniversaries this year, for what is probably the most intelligent cop show ever to hit the small screen. 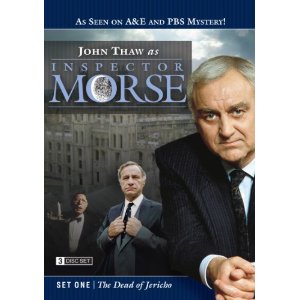 One anniversary is to be celebrated. It has been 25 years since “The Dead of Jericho,” the first of 33 episodes of the splendid Inspector Morse series was broadcast in 1987 in the UK. It was immediately popular in Old Blighty and remains so in re-run today, more than a decade after the last new episode hit the air. New Morse episodes routinely drew television audiences of 15 million and more in a country of 60 million. Few television series can truthfully be called a phenomenon. Morse can.

Morse also played to enthusiastic audiences when it migrated to the U.S. a year later, airing mostly on PBS stations. By now Morse has been watched and enjoyed in almost every country advanced enough to have a television transmitter. 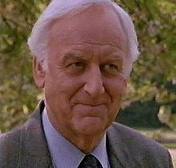 The second anniversary is a sad one. It will mark 10 years from the too-early death of John Thaw, the talented and versatile British actor who brought the quirky but ever-fascinating Morse to life on the screen. Thaw lost his battle with esophageal cancer just two years after the last new episode of Morse was aired. He was only 60 at his death, though he looked older. Not because of his illness, but because he was one of those guys who looked 40 at 25 and turned gray in their thirties.

Thaw appeared in several popular television series. The Sweeny in the seventies and Kavanagh Q.C. later had their fans. Of his movies, Goodnight, Mr. Tom may be the best known. It’s the story of a cranky old-timer in a small rural English town who makes an unexpected bond with a youngster evacuated from London during the blitz. It’s a movie that could have been saccharine in the hands of a lesser actor. Thaw made it both moving and believable. 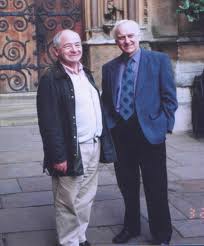 But Morse was Thaw’s triumph, his greatest performance, and the role he will be most remembered for. The character of Morse is compelling. The scripts are intelligent, based on a series of award-winning novels by Colin Dexter as well as some original television stories. The episodes are out of the British mystery tradition with complex plots and lots of suspects and red herrings. They’re two hours long and deal intelligently with themes in the way good literature always has.

The series is beautifully filmed in and around photogenic Oxford. The soundtrack alone — featuring the classical music that the character Morse and Thaw personally loved — is worth the price of admission. There’s hardly a rock or a rap riff to be heard in the entire 33 episodes.

So Morse is not your standard “up against the wall red-neck mother” (or UK equivalent thereof) cop opera where comic cut-out bad guys are identified, chased, cursed, cuffed around, and jugged, all in one hour with time out for commercials. It’s a vast understatement to say the program went against type.

The cop show standard for the eighties was series like the alternately edgy and comic Hill Street Blues, or Miami Vice, which featured fast cars, blaring rock music, great looking women, macho posturing on the part of both cops and villains, and a lot of automatic weapons fire as cops and cocaine cowboys battled it out while the good residents of Dade County dove for cover.

So it’s easy to see how far out on a limb Ken McBain and Ted Childs of Central Television went when they decided Brits were ready for a cerebral, middle-aged, somewhat grumpy, intellectual snob of a detective who, with his long-suffering sidekick Sergeant Robbie Lewis, would take 100 minutes (two hours less commercials) to solve complicated cases by hard detection with an absolute minimum of car chases, fist fights, shoot-ups, gutter language, or Andy Sipowicz style abuse of suspects. 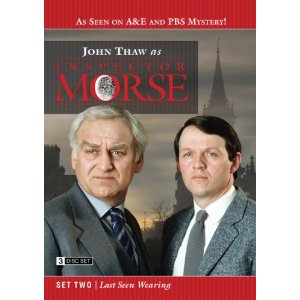 Morse and Lewis are hardly cream-puffs, but neither are they the young stud muffins who supposedly appeal to the demographic advertisers drool over. When Morse was first broadcast Thaw was 45 and looked at least a decade older. At critical times in the episodes Morse is more apt to quote poetry or a line from one of Wagner’s operas than to fall into the flashy but shallow dialogue of Crockett and Tubbs which made Miami Vice a haven for the hip.

Even though Thaw’s Morse was far from the generic 30-something, tough guy, hunk of popular cop series, it seems that many of the ladies have found Morse’s lonely persona attractive. I had to laugh, as I read Thaw did, when more than one female reviewer described Thaw as “the thinking woman’s bit of crumpet.” Eat your heart out, Brad Pitt.

Inspector Morse was so far off from anything that existed or could have been anticipated, I’m sure reading the concept before Morse was aired would have made a marketing major’s teeth hurt. Focus groups would have lost consciousness. Morse fit no known niche, no expectation. It was its own category. And it worked.

Morse works because it’s human drama at the highest level. The makers of the show hired the best writers, and some of Britain’s top actors appear in the episodes. The characters are well drawn: The moody but intelligent Morse. The down-to-earth Lewis (played by Kevin Whatley — who now has his own first-rate series, Inspector Lewis). And the crusty but reliable Detective Chief Superintendent Strange, played by James Grout. Morse deals with the basic and unchanging issues of the human condition, which is why it can still be watched with profit today while Miami Vice and such-like series are badly dated.

The series — widely available for purchase, rent, or to be checked out from public libraries — with its timeless qualities, remains miles ahead of the general run found on today’s cable packages. If you haven’t had the pleasure….

And while you’re watching, for the first time or as a re-visit to a favorite episode, you might consider raising your glass to John Thaw, a fine actor, taken at the height of his dramatic powers.

Do you agree with Larry? Got any questions? Leave them in the comments. As always, I love to hear from you!

Larry Thornberry, a Tampa writer, discovered journalism in his late twenties and says he hasn’t done a day’s work since. His writing — on history, politics, baseball, dogs, wine, movies and television, country music, cultural trends, military matters, and countless book reviews — have appeared in local and national publications, most regularly at “The  American Spectator,” where this column first appeared.