The Hunt For Justice Series #2* 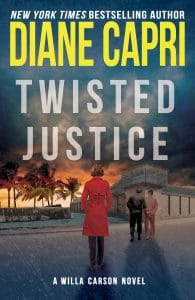 Tampa’s most charismatic Federal Judge, Wilhelmina Carson, returns in another fast-paced novel of mystery and suspense. War hero General Randall Andrews has been nominated to the U.S. Supreme Court and George Carson leads the fight to defeat him. When Andrews is found shot to death in his Tampa home, George is arrested for murder and Willa pulls out all the stops to free her husband in this second installment of the well-loved Judge Wilhelmina Carson Cases.

In another tale of suspense and one surprise after another, this tightly plotted, character-driven novel will give Judge Willa fans the sequel they’ve been waiting for. What, exactly, is George’s game? Realistic twists and turns keep readers engaged and guessing until the finale!