Room With A Clue: A Park Hotel Mystery 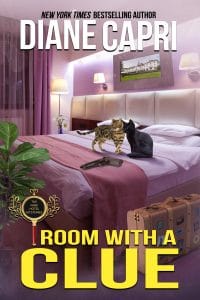 The Frontenac Island Annual Flower Festival is in full swing, and everyone expects the Park Hotel florist to nab the top prize again this year. Until the florist is arrested for the murder of her rival, found dead in the middle of the hedge maze during the relay race.

Andi feels compelled to prove her friend’s innocence, of course… but it isn’t like she doesn’t have other things to do. Her romance with Mayor Evans is heating up, although Sheriff Jackson is still in the picture, too.

And then there are Andi’s parents, pressuring her long-distance from Hong Kong to join them at Club Paradise, the private club they own. Andi has never wanted to move to Hong Kong and she still doesn’t.

Between one thing and another, it’s all Andi can do to keep her mind on the job and her head above water as she homes in on a killer.

Grab your copy of Room With A Clue today!