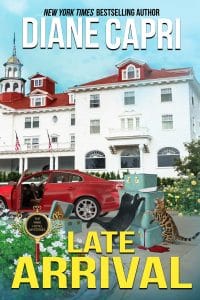 The last person Andi Steele ever expected to see again was her old boss, Jeremy Rucker. He’s the reason her legal career is in the toilet and she’s toiling at the Park Hotel on Frontenac Island.

But here he is, claiming to be looking for a flash drive that Andi knows nothing about.

The next morning Jeremy’s dead, dumped at the bottom of the west bluff below the hotel, and Andi’s the prime suspect. Until someone kidnaps her best friend and it becomes clear that the flash drive’s contents are worth killing for.

Now Andi must get her hands on the flash drive, figure out who killed Jeremy, and get Ginny back before they kill Ginny and Andi, too.

But if the flash drive gives her the ability to return to her old life again, is that what Andi wants? What about her parents? And what about her love life?