The Hunt for Jack Reacher Series #17 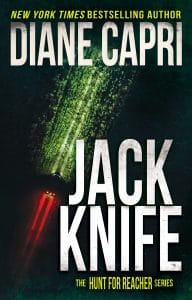 FBI Special Agent Kim Otto picks up where Lee Child’s Never Go Back leaves off in the Hunt for Jack Reacher.

FBI Special Agent Kim Otto is hot on Jack Reacher’s trail as he speeds away from Chicago.

Since Reacher hooked up with escaped car thief Petey Burns in South Dakota, he’s had a steady ride. Destination unknown, but traceable.

Otto’s manhunt is derailed when she learns Jack Reacher’s nephew is in trouble.

Jake and his mother have disappeared, leaving a dead man behind.

Seven years ago, Jack Reacher teamed up with the CO of his old unit, Major Susan Turner, to demolish a drug smuggling operation in Lee Child’s Never Go Back.

Now, Otto and Turner race to save Reacher’s nephew from men who seek to deliver vengeance first.

Filled with twists and turns to keep you breathless until the explosive finale, can Otto find them all before it’s too late?