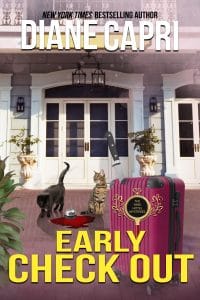 Andi Steele’s law career is still in limbo and her boss at historic Frontenac Island’s Park Hotel has made it clear that she’d better straighten up and fly right if she wants to hold on to her stop-gap concierge job until she can go back to legal work.

But when a trip with a friend to deliver bird seed turns into the discovery of another dead body, Andi can’t keep from investigating.

Now the handsome Mayor Daniel Evans and the bossy Sheriff Jackson both warn her to leave the crime to the police, while Andi’s boss wants her to keep on top of things to protect the hotel’s image.

Leaving Andi to juggle attentive men and ornery bosses, while staying one step ahead of a killer.

Grab your copy of Early Check Out today!