GoodReads Giveaway! Enter for a Chance to Win Blood Trails 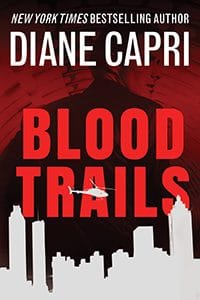 Michael Flint, the star of Blood Trails, makes a big promise — that he can find anyone, anytime, anywhere — dead or alive. How would you go about finding Laura Oakwood, a woman running from the law? Better leave this one up to the professional Heir Hunter — it could get dangerous.

Blood Trails will be released on October 4, 2016, but it’s available for pre-order now from Amazon in the form of eBook, paperback, or audiobook.

Enter the GoodReads Giveaway for a chance to win one of 100 free eBook copies of Blood Trails!

I can’t wait for us to journey through this new series together!

Cover Your Laptop Cameras… Hackers Can Peer In!
Diane Capri Swag in This Month’s Giveaway!