The Hunt for Justice Starts Here! 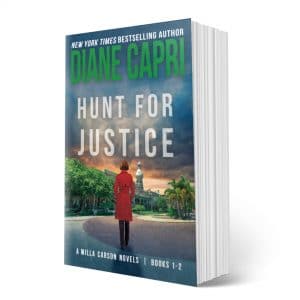 This Judge Willa Carson Thriller Kicks off The Hunt for Justice

in this Special Edition Set FREE for a LIMITED TIME ONLY!

Book 1 DUE JUSTICE: Judge Willa Carson is bullet proof – except when wild justice rules from the grip of a gun.

When a famous plastic surgeon’s decomposed body surfaces in Tampa Bay with a bullet in its head, Federal Judge Willa Carson’s “little sister” is caught in a high-stakes game of greedy lawyers, blackmail and deceit. Carly Austin knew the victim too well. Does she know too much about the killer, too? Before Willa discovers the answer, Carly disappears. Can Willa save Carly from herself and the murderous conspiracy? Or have they killed Carly, too?

Free-sprited Judge Wilhelmina Carson is quick, witty and stubborn. She finds nothing is what it seems in a world where attractive women with enough money are made, not born, and beauty can cost your life. Judge Willa debuts in this fast-paced mystery filled with great characters, humor and suspense.

But when a controversial war hero is nominated to the U.S. Supreme Court, Willa’s normally easy-going husband throws himself into the fight, determined to thwart the nomination. His relentless campaign strains their marriage and Willa’s faith in him, until the General is killed. And George is arrested for murder…

Willa is determined to save the man who’s been her anchor for seventeen years. But does that man still exist? As Willa delves into her husband’s web of secrets, scandals, and political scheming, she’s forced to uncover George’s game. Is he the calculating killer the world believes or a deceived victim of twisted justice?

Love and politics are at their dirtiest in this tightly-plotted, character-driven novel. A complex thriller, with a shocking ending, this is the book Judge Willa fans have been waiting for!
Realistic twists and turns keep readers engaged and guessing until the finale!

“Beneath this Judge’s robes is a riveting character – she’s quick, witty and stubborn. Willa Carson finds out the rich are different, and takes the reader on a roller coaster ride that leaves you wanting more!”
Tampa Tribune